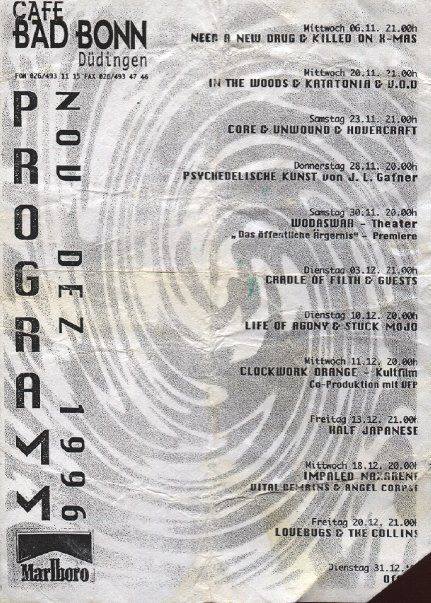 Autumn Wilderness Tour Europe with In the Woods, Katatonia and Voice Of Destruction. The venue was minute ! Popular bands like Life Of Agony etc. have played there – unbelievable. We pulled another V.O.D Seated Gig, as the attendance wasn’t as hot as we’d hoped. There was a movie seat row which we placed in front of the stage – Katatonia and In The Woods sat in them cheering madly – it ended up being great fun. Afterwards we had a good party. With the fucked up Vienna gig, because of visas, Spencer didn’t want to take the chance in Italy by getting sent back again. Diccon and Johan had visas, so they went ahead with the other two bands. The rest of our South African asses had to get a lift into Bern with the PA guy to catch a train to Marseilles the next morning and wait for them two days in France.

We stayed over in this strange club/restaurant/crash pad kind of joint. Hot shower !! Attempted playing some bass guitar – figured out the Four Horsemen riff – amused Francois quite a bit.