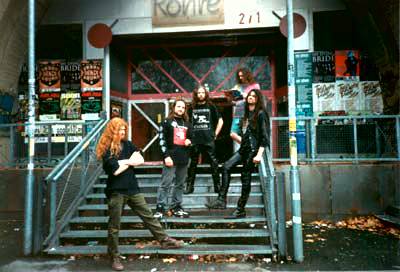 Shower ! Shower!! Praises praises ! Two days of gigging without a shower is pure hell, drenched in sweat each time, ugh! Thank God for Shower to Shower talcum body powder ! All the backstage rooms are covered in band graffiti. Inside the shower it says Urungus of Gwar was here and something about Billy Milano’s fungus – yikes ! Feeling like a new man, we unload the stuff and sound check. It’s a huge arched, hangar-like venue situated under a bridge. Like all the other places, some very well known bands have played there and many are to play soon.

The bus has a CD player (broken), microwave, TV & VCR and a toilet which stinks ! Luckily it’s downstairs – but unlucky for Greg, though, cause he’s camping down there, in the kitchen/downstairs lounge area.

The crowd liked our show. There is a German girl who has followed the tour around for quite a few dates. Dedication ! Roggo, Katatonia’s manager is a party animal and gets along with us like a bomb. The rest of the band took a long time to come out of their shells – ended up being nice guys.