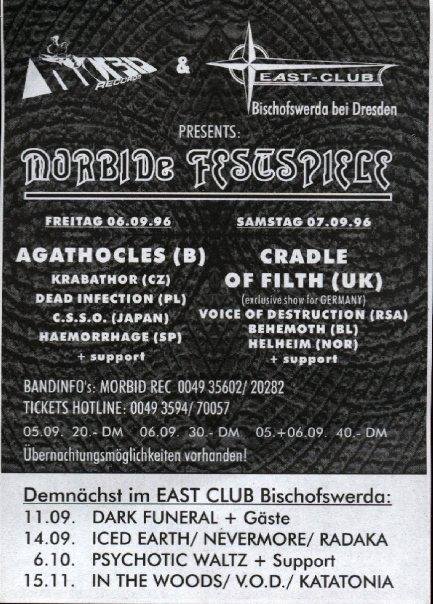 Morbide Festspiele Festival – East Club – Bischofswerda (near Dresden), Germany. We flew over to Germany and took buses from Berlin and then trains to Bischofswerda. We got so trashed I’m surprised we found the place with all the different connections ! On the station Morbid greeted us – First Contact ! Olaf, Niete, Braunie, all of them. It was great. We entered the East Club. The party which ensued was even better. Booze and food everywhere in the upstairs band area. Krabathor played when we arrived in our alcoholic daze and met them the next morning. Absolutely amazing guys, just like the Morbid team.

Agathoceles also played, so did Dead Infection, Haemmorage, CCSO and some Black Metal bands. Our gig went down great and we partied ourselves kaput ! I gave Olaf some biltong (beef jerky), he chewed and chewed and I asked him if he liked it. He said it wasn’t too bad. I then asked him if he knew it was dried meat. He almost flipped ! I didn’t know he’s a vegetarian !! Sorry Olly !!

We met Lugubrious of Haemmorage and had a great chat. There was this weird little dude from Poland (his band is called Poseidon) and with complete broken English had Francois in stitches, making up these Grind core lines of non-existent songs. Fucking hilarious ! Before sunrise, Francois and Olaf were still demanding cognac(!) and the excellent East Club owner got them a bottle. I didn’t want anymore and chose to lie down in stead. The different cultures present were crazy, a real United Nations meeting: South Africans, Germans, Czechs, Japanese, Belgians, Poles, Spaniards, the whole nine yards. It was truly a great experience. Everyone but the Black Metal bands were friendly, jovial and in party mode.

It was a sad moment when we had to catch a train back to Berlin to fly “home” – London.

The few months between this fest and the Euro Tour didn’t pass quick enough. Worked. Rehearsed a bit. Hung around. Bought a bass guitar. Fran and I visited two friends in London a lot, Fred (Irish) and Jeordia Spanish/French). Had some great evenings of food and drink, listening to Demis Russous or having an African drum jam at 2 in the morning. Bought another 30 or so movies which Fred mailed back to SA for me while we were on tour. Some of the movies are: Sergio Leone’s classic Once Upon A Time In The West, Sam Pekinpah’s stunning Wild Bunch (both of these in Widescreen format, of course), Jess Franco’s ludicrous but sexy Bare Breasted Countess and Sadisterotica, Dario Argento’s groundbreaking Italian cult hit, Deep Red etc. If there is a demand for it, I’ll do some reviews of them for the site.

Before our European Tour we did a week stint in the Czech Republic and Slovakia as a warm up for the big daddy.